Back to the old me 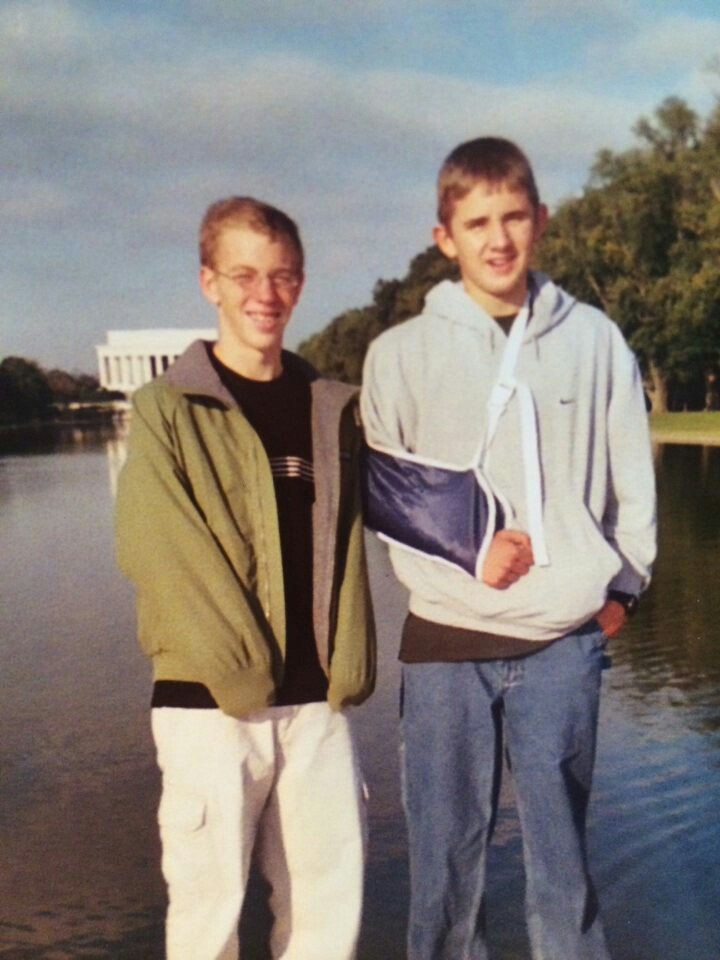 The literal “old me”, back in 8th grade with a broken collarbone from football. We were on our Washington DC trip and man was that miserable with a sling.

It’s been awhile since I’ve posted something here. I’ve had about a dozen backed up blog posts that I’ve needed to write, including my experience with the rest of my third year clerkships, my experience with gaming and competing with Team Aaron Bowles, my start of jiu-jitsu training, my ridiculous time with learning to replace an alternator, and more. Those things are coming, but for now I wanted to check in.

As the tone of my last post indicated, life was a bit rough over the past year. My third year of medical school reached what i believe is the breaking point of my medical school career, hitting rock bottom in more ways than one. For lack of a better words, I was in a pretty bad place from the standpoint of taking care of myself. Considering the whole “becoming a doctor” thing, we are generally pretty bad about the basic functions of life, such as remembering to eat or sleep enough. I got in a pretty deep rut. It made me think a lot about how I honestly had a lot better control over things when I was in high school. Then reality slaps me in the face and makes me realize it was a much simpler time, where things like a homecoming date or prom date were the biggest worries that existed in my world, and the structure of something like an organized sport can keep crooked arrows straight. I’m not that 18 year old kid anymore.

The thing is: I feel a change. A shift. I’ve hit the tipping point. Thing is, medical school found a way to beat the crap out of me. Beat the crap out of who was once a confident person. I used to have (arguably too much) belief in myself and my abilities, and approached every sort of thing in my life with a feeling of invincibility, like nothing could stop me. Medical school slowly but surely eroded that foundation of self-confidence I had, through my less than ideal grades my first year, failing my first medical school test, getting destroyed by STEP 1, and just being chipped away by test after test without any sort of end in sight. As this chipped away, I stopped exercising to the point where I maybe made it to the gym 2 or 3 times for an entire month for multiple months, where I continuously ate Papa John’s pizza (cheap and delicious, but still), and even stopped going to church. Worst of all, I had stopped believing in myself, even though I still thought from a clinical perspective that I was doing very well when it came to actual doctor things and not just multiple choice tests. That feeling of invincibility was gone. I feel like a lot of people in my life saw that, that kind of confidence I had even talking to people had to be faked: it was gone. I had to do a lot of acting the past few months, and it didn’t feel good.

Yesterday, I just finished USMLE STEP 2 CK, after what is probably one of the most important months of my medical school career: vay-cay-shun. I took a vacation month (of which I have 3 total this year) during July in order to get my life right. Sure, I spent the first month of it binge playing Dota 2, Counter Strike, and eating carry out pizza. But slowly, I began to drag myself out of the mental abyss I’d created. I went and started training Brazilian Jiu-Jitsu. I went back to confession and started going back to church. I cleaned my apartment, I began running again, lifting weights, and actually even studied a little bit for step 2. I still felt sluggish and didn’t want to get up to do simple things, but something in me (or the touch of God, who knows), started pushing me up. I started feeling strong again. I got back and started seeing my friends, talking to people who I had literally ignored their texts for over a week, and actually looked at my weeks of backlogged emails.

Something in the past week changed things. I was feeling crappy and like I was going to fail step 2. Honestly, it might have been the death of my dog (which I’ll write about in a later time, look forward to a post about the uplifting process of dying and death, coming soon to a computer screen near you). Regardless, I got so fed up with how I was feeling, how I was acting, and how I no longer felt confident with every step. So, I went out running along White River, and I started yelling and screaming. I ran out there, stopped halfway along the river, and started screaming. I let my emotions out, that raw anger, that unrefined desire to be primal, strong, and confident. Sure, I scared that couple who was quickly walked by with their baby in a stroller. They gave me some weird looks, but I didn’t care. I felt free again. Screw this, I thought to myself, I’m getting back to the old me.

I’m feeling strong. I can run a few miles again without hating my life. I’m getting better at Jiu-Jitsu, even though that means constantly getting tired into a pretzel and dominated by people that are better than me. But I guarantee in a year from now I’m going to be kicking some serious gluteus in BJJ. I finally got to sleeping enough, eating right, and I feel a bit proud of getting back into shape. I want to be the most “yacked”, as the young kids in youth group used to say (a combination of “jacked” and “yolked”) I’ve ever been in my life, and I want to go into residency next year with all of the momentum of destroying every challenge that stands in my way.

I guess this post is a literary representation of what I’ve been doing when I get up in the morning every day for the past weak, putting my hand into a fist and beating my chest like some sort of tribal warrior, feeling ready to do battle with the day. I’m back to feeling like a fighter.  I’m leaving for the University of Maryland for an away rotation in their trauma surgical ICU, and without my desktop computer and the temptation of video games, I’m going to have a lot more time to both read some books and write more. And much like my life goes, I still have to pack, and I have to be in at 7am Monday morning in Baltimore ready to go. Somehow, it’s all going to be okay. More than okay. That fog of the past 12 months is gone, and I’m ready to kick ass.

It feels good to be back.

As always, here’s the song I’d like to share that’s been on repeat for the past week or two. It really resonated with me, because I feel like I got shown how to love again, both love myself and my life. Also, I’ve got a huge crush on Kai, who just kills the vocals. Skrillex & Diplo – “Mind” feat. Kai